This year I made the Christmas card design much more simple than I did last year, and so I got them done in time, and even took photos along the way.

Then, using a dark green cardstock, I cut rectangles that are .25 inches smaller on each side than the finished card – 4 x 3.25.

Back to white cardstock, I cut rectangles smaller still – 3.75 x 3. If you are running short of cardstock, these could be a bit shorter, as you are going to lop off the bottom anyway.

I wanted to cut a curved bottom, so hunted around the craft room for the right tool. I found it in one of my old coluzzle templates. I used one side of the curved vine. This could be cut free hand, or there is probably a die out there that would do it for you. I used this to cut the bottom of all of the white rectangles (3.75 x 3)

Once I had the papers all ready, I used ColorBox evergreen pigment ink to stamp the tree so that it is sitting on the top of the “hill”. I then used embossing powder to emboss the tree. Stamp is soft pine 294c from Stampscapes inc and the embossing powder is Topiary by Personal Stamp Exchange (it’s old, if you can’t find it, mix a dark green with a little gold for the same effect.)

I mounted the stamped piece on a green rectangle, lining up the top and two sides to show 1/8th inch green border. This will leave a larger green bottom section.

Once the card is assembled, it is time to play with glitter. I drew a bead of glue along the join of the stamped piece and the green piece, and put a bit of highlight on the tree, then covered it all with sparkly (is there any other kind?) white glitter. 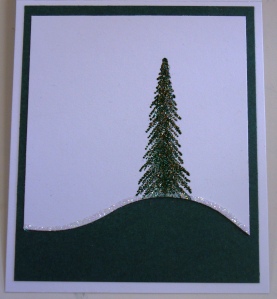 All that is left to do is put your hallmark on the reverse side and send it off. I like this card because it fits in a standard invitation sized envelope, no special mailing packaging necessary, no extra postage. 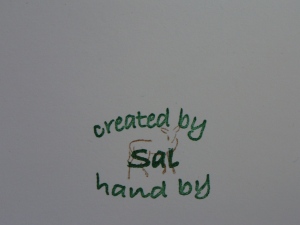 One recipient told me it is the best card yet. How will I live up to that?

I know I always promise you photos of what I am doing… and sometimes I deliver! I waited until the last of the cards were mailed to post this, but luckily, I did remember to take some photos as I went along on this batch, so I can give you a break down of how I did it.

When I designed these cards last summer, I thought they would be pretty easy to put together. And while they were, there were so many steps that they took a lot longer to make than I thought they would! the concept came from Cousin L saying she loved to put my cards on the tree. I thought that making an ornament into a card might make it easier for her. So them I started playing around with my Cricut machine, and discovered I had a cartridge that would cut these cute ornaments. It even had a layer to cut the shiny cap.

So, I started cutting out ornaments from solid colored papers. I used several different shapes, and mostly red and green papers, although I did do some silver and blue ones as well. I also cut a huge quantity of plain white for backs on most of the ornaments. I did play with some two-sided ornaments – but this proved even MORE time-consuming, so I quit that soon. If you got a partridge/pear tree ornament, you got one of three that I made that were double-sided. Aren’t you lucky?


Once the ornaments and the caps were cut, I used different scraps of papers to “fill” the cut out space. In the one on this photo, I used silver for the runners. Then I backed the ornament with a white circle, and attached the shiny cap. Once all the layers are secure, I used Stickles glitter glue to highlight the ornament.
While that dried, I cut patterned paper to fit my card base (card base plain white, 8.5 by 7.5, folded the long way, so front is 3.75 by 8.5) and adhered it to card front.

Then it was back to the Cricut – changed out the cartridge for a font cartridge, and cut the letters to spell “Joy”. I attached them on the card front as shown. I outlined the letters with glitter, and set it aside to dry. Maybe you are seeing why they took so long to assemble? I love glitter, but it has to dry.


Once the glitter on everything was dry, I attached a cord to the ornament, then set an eyelet in the card front, threaded the cord through, and adjusted it so that the ornament is in the middle of the card, covering the “o”. I taped the cord on the inside of the card, and it was almost done. All that was left to do was make sure I stamped the back with my “created by hand by” stamp.

The cards were fun to make, and maybe if I didn’t have to do 75 of them, I would have finished before Dec 20th!