I just reviewed my last post with knitting, back at the beginning of February. I wanted to see what was the last knitting project I showed you, so I could catch you up. 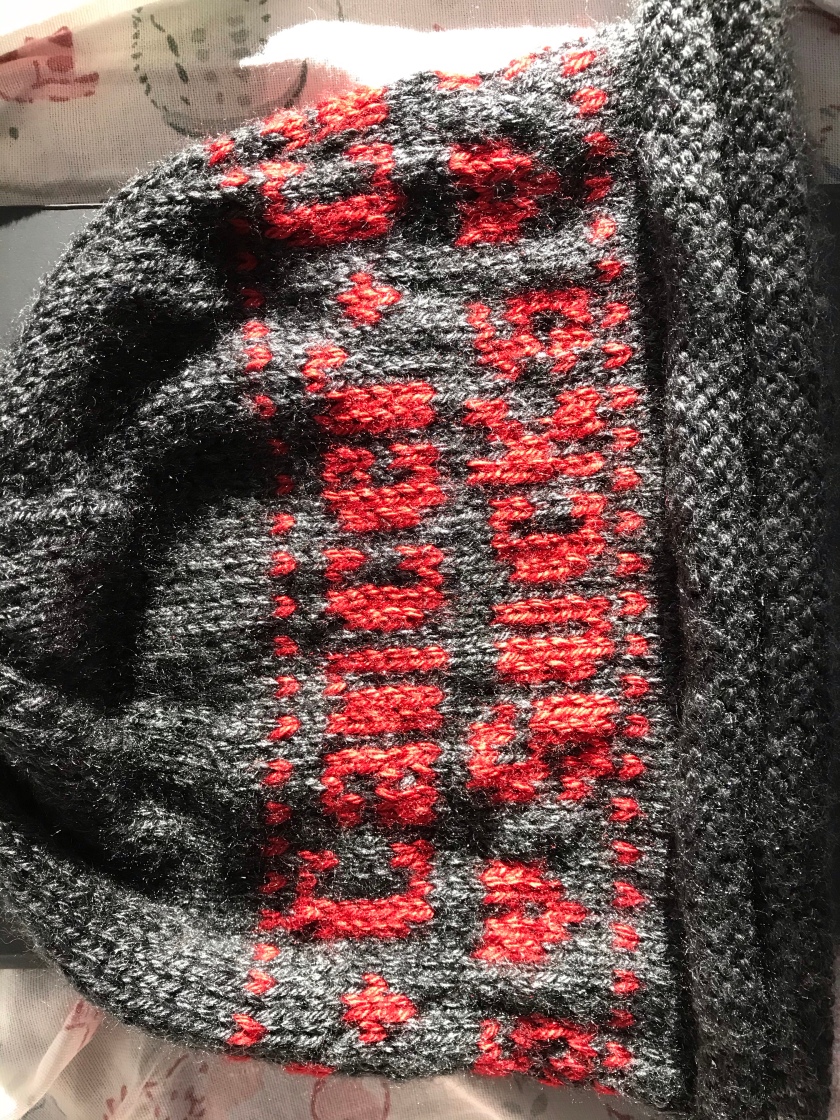 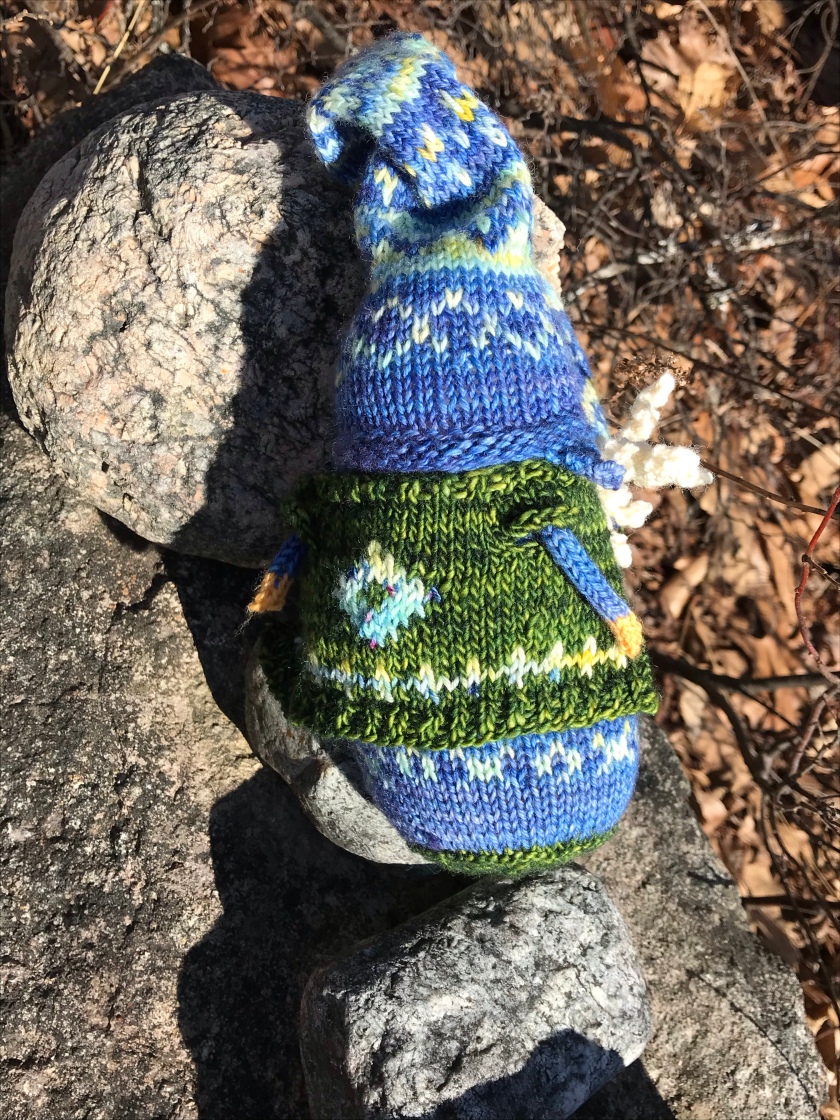 Two chemo hats and a gnome. Seriously, that is all I finished all year? Ye gods.

I do have a few long term projects that I am working on, one that is near to do. That is a second Milky Oolong shawl, this one in a soft pink. Not as dramatic as the purple and orange one, and the larger size. I am on the endless picot edge. I hope to finish it in a week or so. I do a bit on it every night. It is pinker than this.

I also have a year long mystery knit along scarf going on. So far I have kept up with the monthly clues. Lace weight with beads, Estonian lace. It is fun and I think will be pretty. This isn’t a great shot of the first three clues, sorry! April is out now, so I will be working on it this weekend.

I don’t have a current picture of the sweater on the needles, it is one I am making up the pattern for, changing a basic worsted weight raglan to a sport neck raglan with a deep v-neck, a la Volition. It is taking forever because the rows are sooooo loooong. I am near the sleeve divide, perhaps I will get a photo of it after that.

And I am working on a lace scarf from a pattern called icy shores. I went with larger beads,and opted out of contrasting nupps, but I think it is going well despite the design changes. I am quite a bit farther than this, but you can see the color and the beads in this one.

So, as if that isn’t enough, I signed up for Romi Hill’s Mystery knit along shawl. That starts a Friday and will be intense, a clue a week. I anticipate falling behind.

And oh, yeah, I have a pair of snow fling mitts on the needles for A for Christmas.

That’s all the knitting, for real. At the moment.

There has been some spinning, too. I started spinning some silk/merino I got at a couple of fiber festivals. I have about 15 ounces, I am going to make a traditional 3 ply. I have one bobbin full and one bobbin half full, and at least a dozen ounces to go! 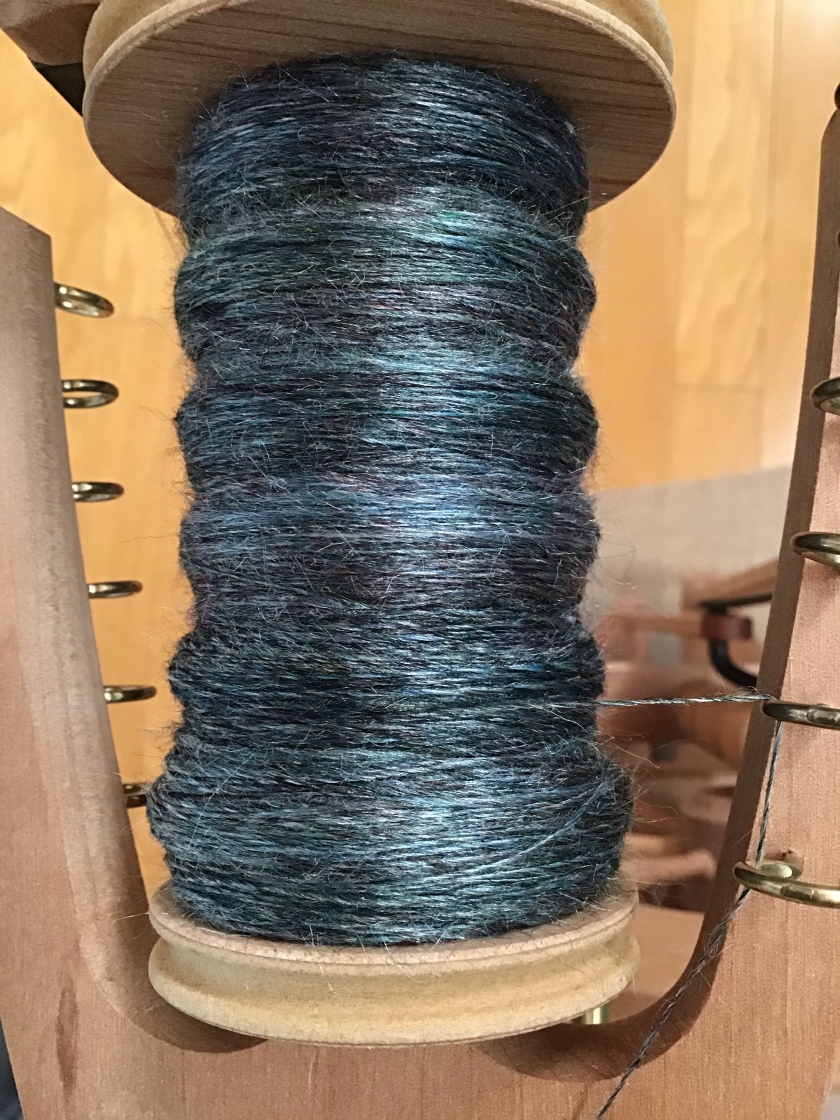 It is surprising to me how the fiber turns out when spun, the colors mostly disappear, leaving a blue gray. That is ok with me, I like blue gray, but I was still surprised.

There also was sewing, but I will leave that for another day. Nothing is finished there, either, so no rush!

It seems I am just plugging away at things,and I know, I will suddenly one day have everything done as if by magic. I will be sure to let you know when that happens.

No, I am not new here, just haven’t been hanging out here lately. I got busy… the world got crazy… and while everything looks the same, somehow it is different around here. Who messed with my editor?

So, let me just jump in. We are healthy and as isolated as we can be. Still able to go to work, though work is closed to the public. Other than that, we stay hone ALL the tine. It’s great for getting knitting done. How are you doing? 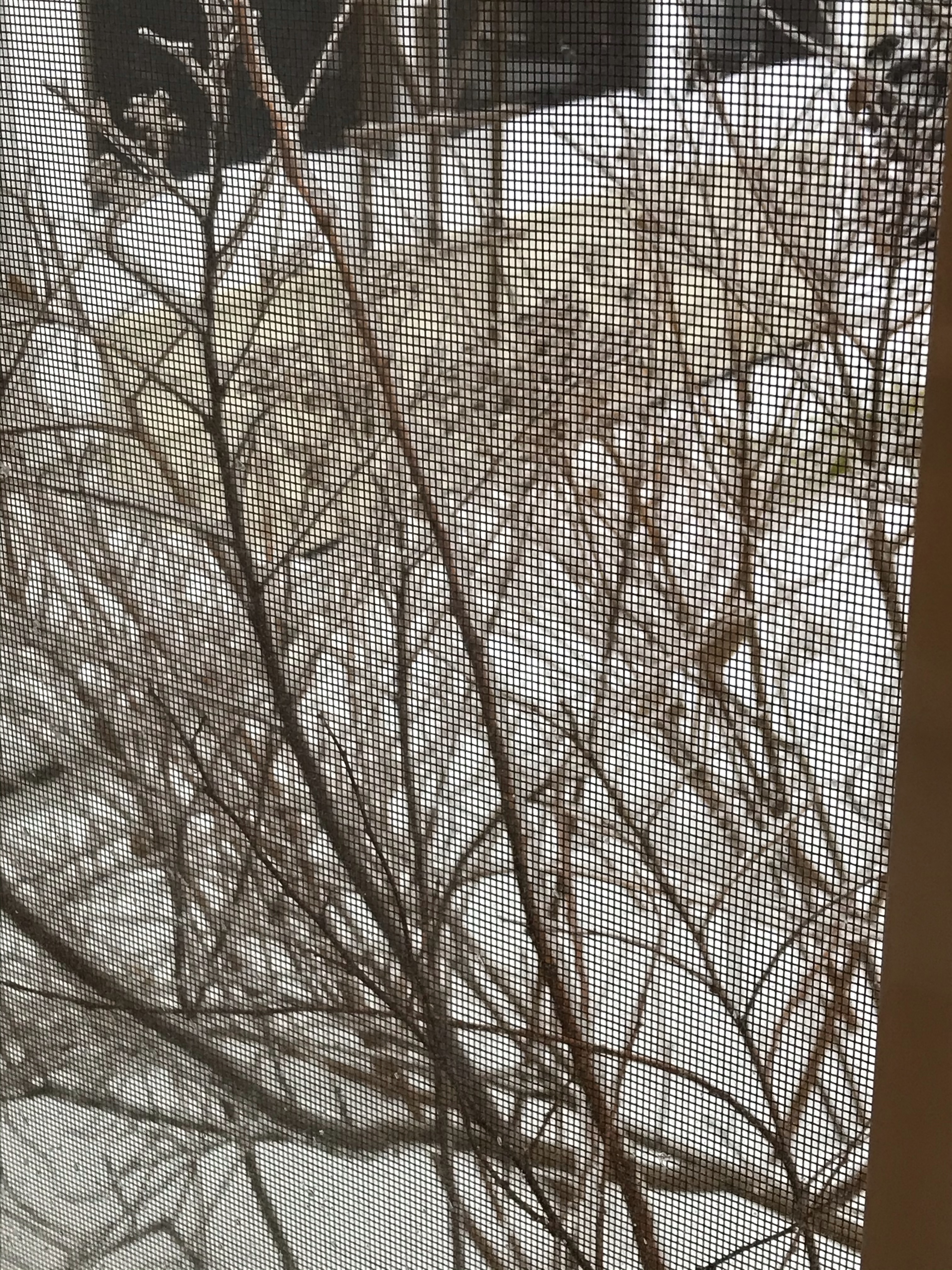 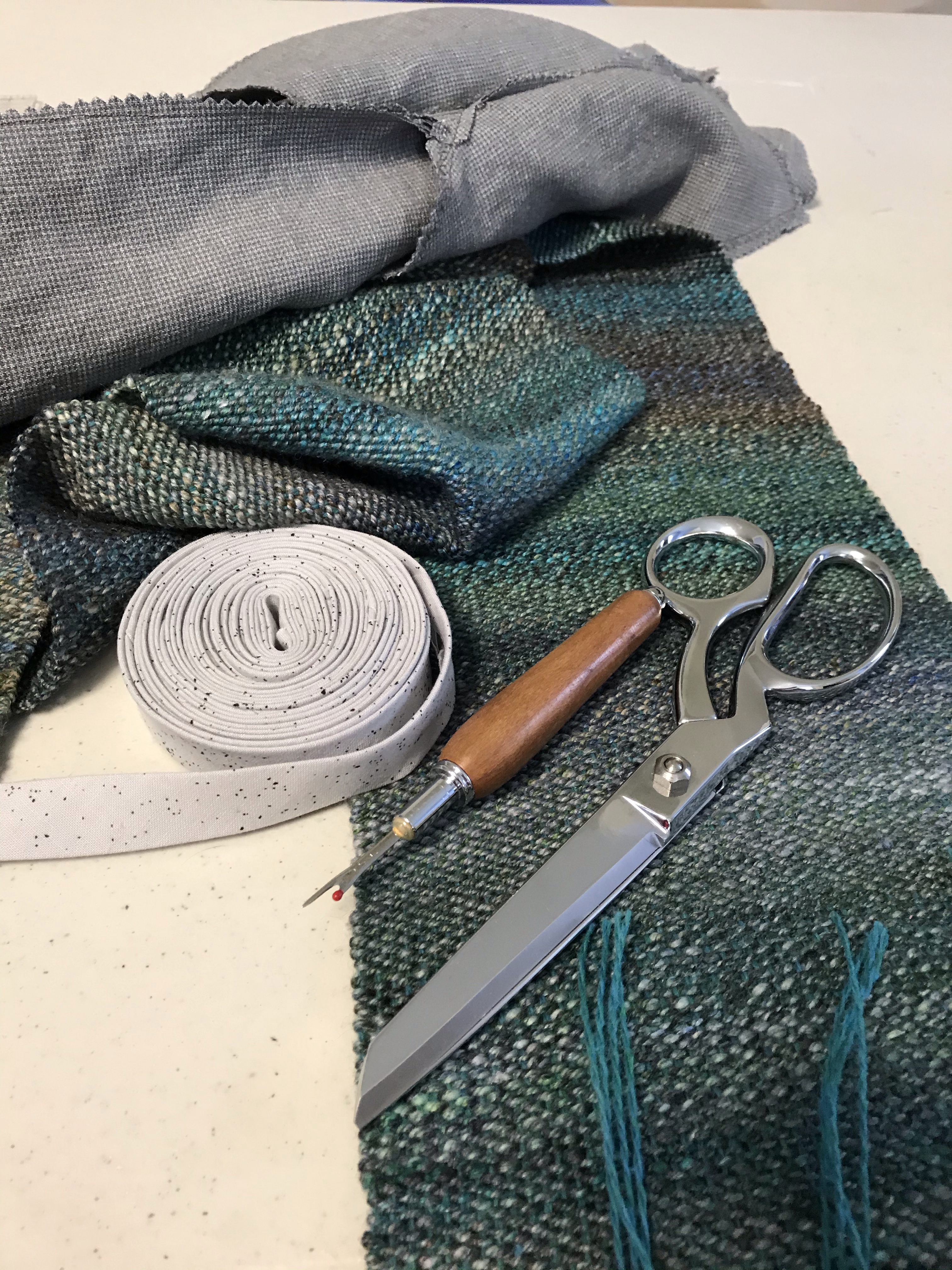 There have been loads of finishes since I last posted!

The long picot row is done and the shawl is blocked. It’s been worn, even, and goes well the intended skirt.

Also finished, some interminable black fingerless gloves, and a couple of hats. 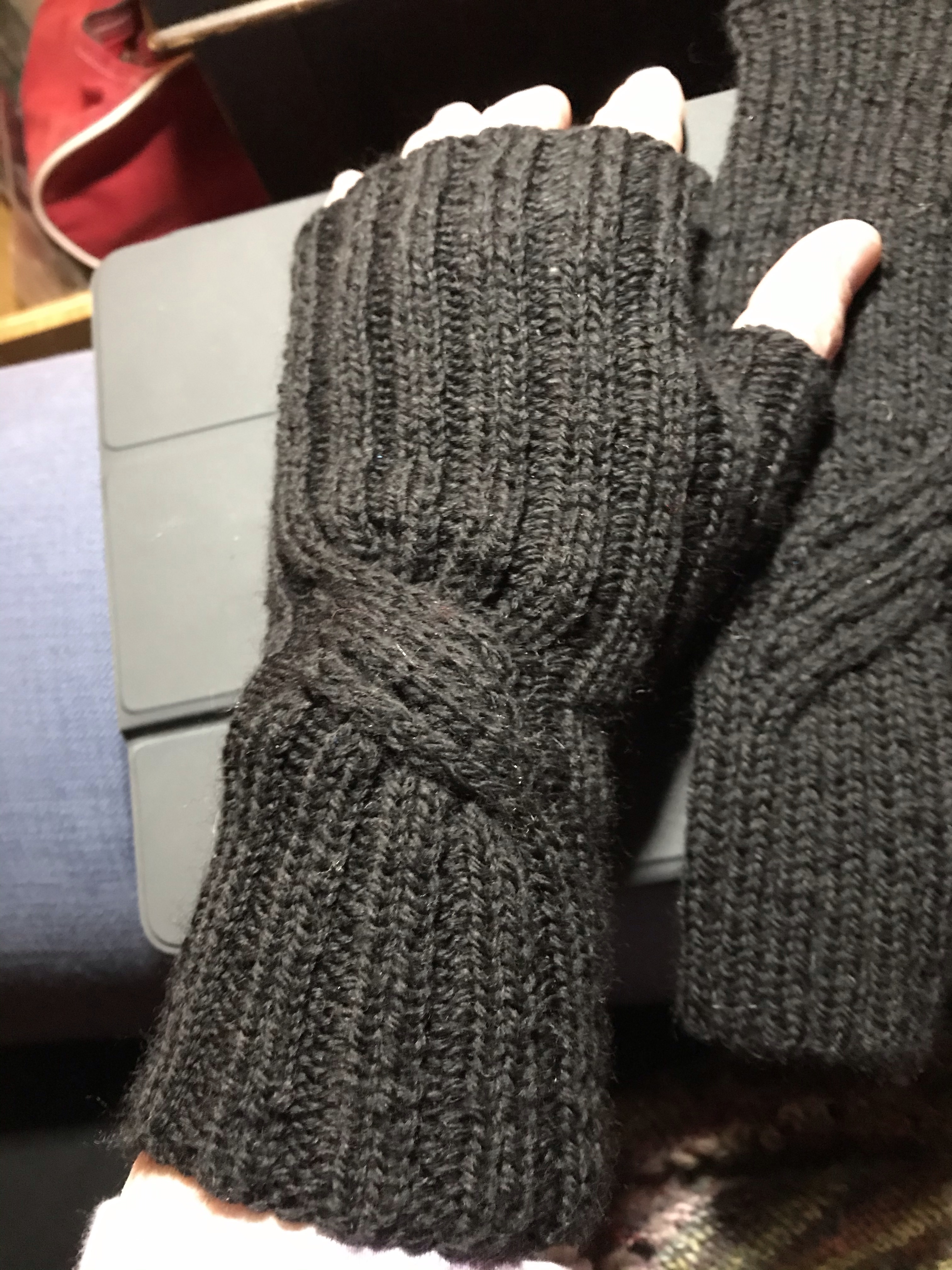 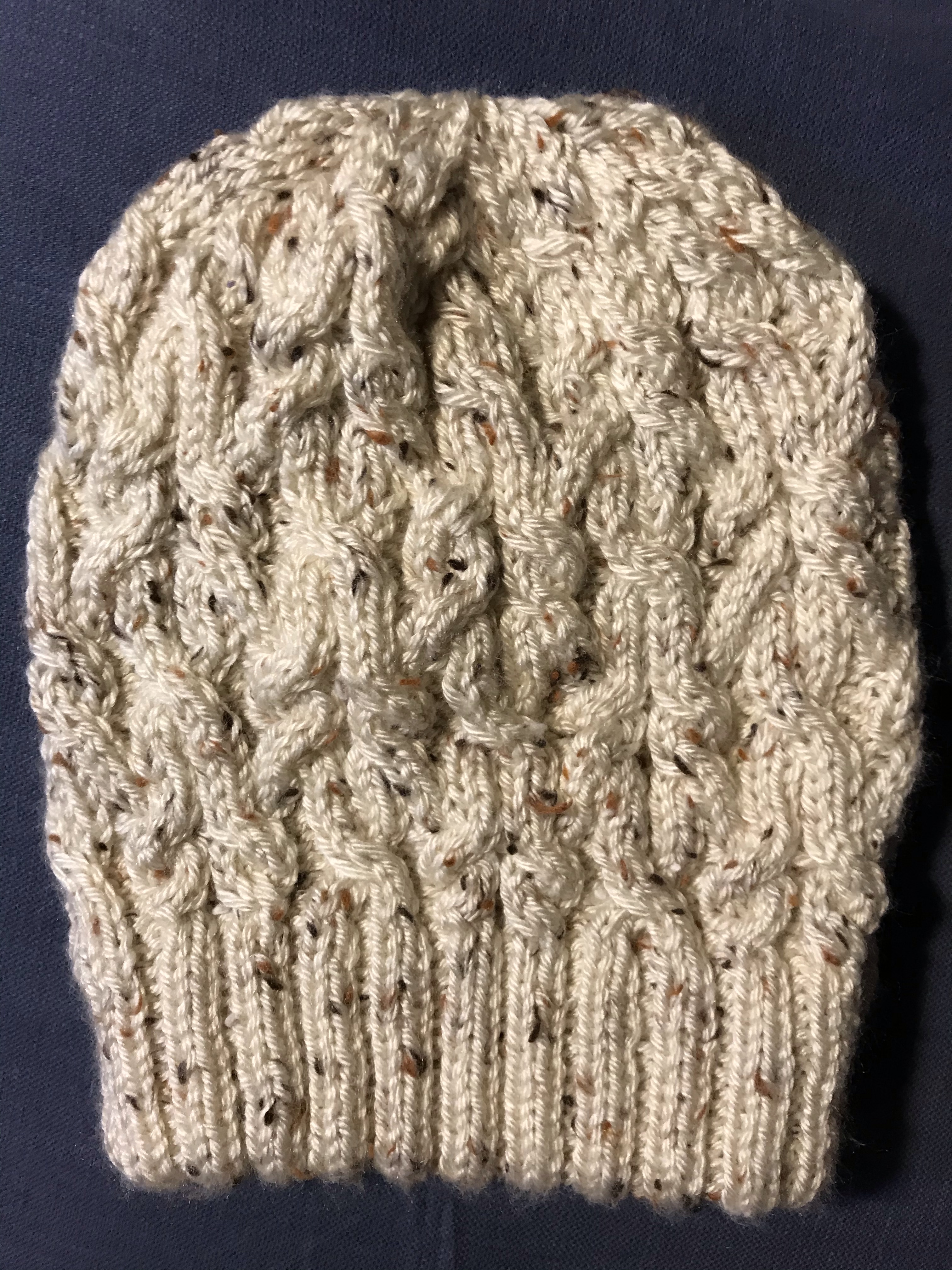 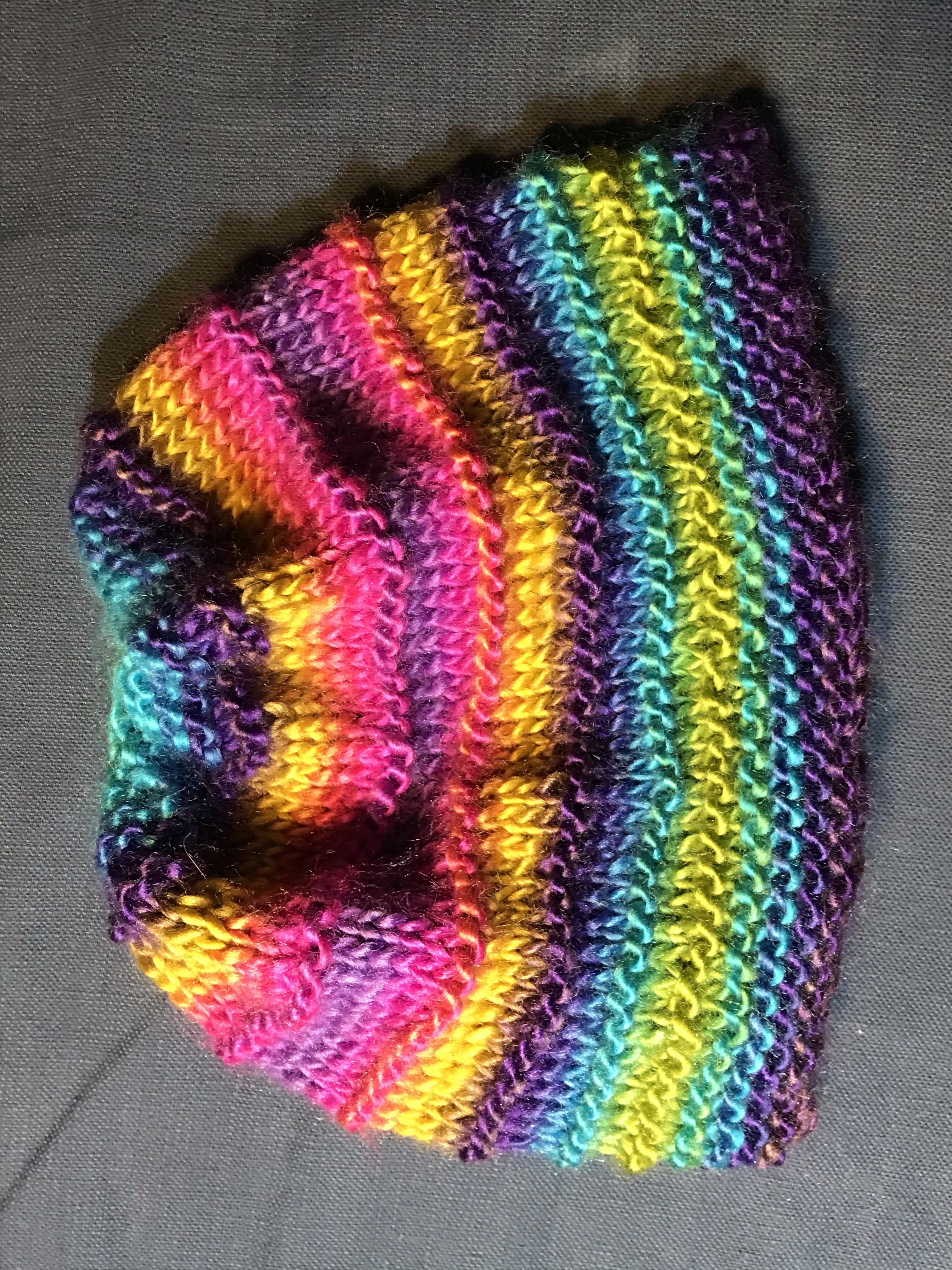 Another finish I didn’t get a photo of is a pair of knitted knockers, plus another hat.

All the hats and the knockers are for A’s niece who is in for a wild ride. She has been diagnosed with Stage IIIB cancer, has had a mastectomy, and is now undergoing a zillion scans to determine if the cancer has spread, and what the treatment will be.

So while we wait, I knit. She said the knitted knockers are better than anything else she has tried, so I will keep knitting those. And soft washable hats.

Meanwhile, Mom recovered amazingly fast from her attempt to give us all heart attacks emergency surgery, even to the point of being able to attend Pies On Parade, which benefits her local food pantry. She is on their board, and is one of the organizers of the big, complicated event. Normally she is tearing about town checking on volunteers at all the venues for the afternoon. This year, she was boss and I was her driver and her legs. We both were tired at the end of the day, but it was a great event again this year. Mom says it is her last one of organizing it. Next year, we will go and eat pie, instead. That will be more fun.

And all the tax training is done, it is time to start preparing returns. Today is the first day, and I will be in a new venue, working with a different volunteer from my normal crew. But we all know what we are doing, so I am pretty sure it will feel familiar in about two minutes. I will be doing this every other Saturday. It will really cut into my knitting time! Also, it means I will miss Whorls and Purls every other week, which is a drag. But spring will come, and things will return to normal!

I have to run and get ready, but I will be back…

At least for the moment. It’s been a wild ride so far in 2020. Lots of major health issues in the family on top of the usual pre tax season mad crush of training and tech issues. I don’t know if I am coming or going!

There has been a little knitting but no finishes to show, though I am one long picot bind off row away from a finished shawl so I will share that soon.

Meanwhile, I am off to get caught up on all your posts these last few weeks!

Not one for resolutions, but goals, I have been giving it thought again this year, as many of us do. Let’s talk about my fiber goals, as that’s probably what is of interest to most of you!

Last year I surpassed my Ravelry project goal, finishing 34 projects, far past the 25 I set for myself. So that’s an easy one for me to set this year, 35.

I completely missed my spinning goal, which was to spin more fiber than I acquired. Not even close because I simply stopped spinning during the summer – some big custom knitting orders came in. So my goal remains the same this year, try again!

Weaving goals are more about practicing and improving my skills. And exploring color – it behaves quite differently with weaving than with spinning and knitting. I am constantly amazed!

Sewing- I am slowly working on a few things, and I like this pace. Last year I made a skirt and most of another. In 2020, I would like to finish it and perhaps make a jumper for which I have the fabric… a lovely dark blue corduroy with a tiny paisley print that I have owned since the late 80’s. It seems time to do something with it! But let’s go with this realistic goal – finish the skirt and start the jumper. 😉. I have fabric for several other skirts, so I might also make up a few of them, now that I have the pattern and alterations sorted out.

Non-fiber goals that you may or may not be interested in, but that writing down will help to keep me honest:

I think this is enough for one year.

When I look back on the teens, I think my theme was stability. Not very exciting, I know, but ever so gratifying! We have settled into our home and ourselves, we were able to legally marry and end all sorts of uncertainty. I settled into a role at work that, while not perfect, is pretty stable. A. figured out a way to be steadily, gainfully employed while totally controlling what she does, where, when, and for whom she does it. Our lives are pretty good right now.

Crafting-wise it has been a decade of growth for me. I have really dug into my knitting and feel confident that I can do anything with two sticks and yarn. There are things I choose not to do yet (brioche!) but I know I could if I wanted to. I have learned to spin! Oh, I love being able to make my own yarn! And I am learning to weave, which is something I never dreamt I would be able to do. I give thanks every day for youtube and Ravelry!

Speaking of Ravelry, that has become a big part of my life, online friends have become friends in real life. Though we seldom see each other, we are truly connected through the fibers of our craft. (Pun intended).

And I feel the same way about my friends here on WordPress. While some may not understand it, you are my friends, my cheering squad, my peeps! I feel so lucky to have found you all.

It’s been a good decade!