I am not sure where time goes!  I do know that when it was so hot (as in all summer up to today) I had little interest in actually moving, and so sat and knit and spun a whole lot.  Last week I laid out such a nice chore list for myself on my Friday off.  I did OK with the list (it nearly killed me), but did nothing extra.  This week, I did not have the luxury of Friday off.  So, because we did very little this week as far as chores go, in spite of impending company – less than a month away! – I have lots to do this weekend.  I hope I really can get a chunk of work done tonight and Sunday.

Saturday we are going to Bangor in the morning for a car appointment and to visit A’s niece T, the one we moved a few weeks ago.  She wants some help deciding on furniture arrangements, and so we will head over there to see the new place while they work on the truck.  We will take both cars so we are not tied to the service departments’ schedule, and so I can zip down to knitting in the afternoon if we are still in Bangor.

Since the humidity has broken, and the weekend promises to be clear and dry, I am going to try to force myself to do a few things best done when the humidity is not 99%. Things like some yard work, and painting the shelves of the book cases.  I might even start tidying up the craft room.  But probably not.  Let’s not push things, OK? Naturally, there is laundry and kitchen and bathrooms to clean, as there is every week, and the grocery shopping.  Ugh.  I am already tired. 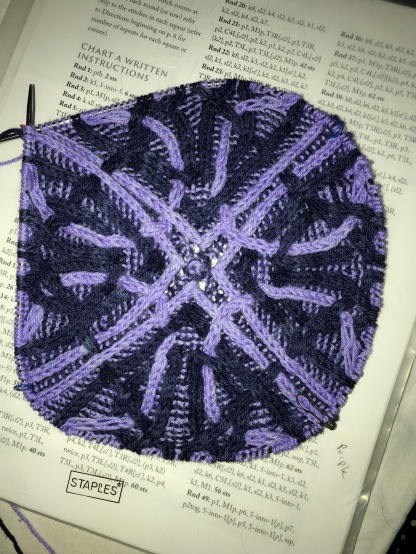 The spinning is 8 ounces of worsted weight, combining two colorways to make 4 different skeins that I spun last weekend.  That is drying now, so I will get final yardage later on today, and plan to knit it up as a baby sweater. there was another skein of yarn made last weekend, but I didn’t get a photo of it yet.  The Durrow square is coming along.  I have committed to at least two rows a day, and I hope to get this square finished by the end of the weekend.  Then in a silly fit of wanting to do something completely different, I cast on a scarf for my stepbrother J.  At least, I think it is for him.  I promised to knit him a scarf to thank him for all the work, and I always intended to knit him more than one.  So this might be one of them.  It is yarn I made from some BFL fiber I dyed quite a while ago.  I was learning and experimenting about color and spinning, so have four mini skeins.  I think they will make a cheerful soft scarf.

As you can see, it was too hot to move, so I basically just sat and played with fiber and yarn.

And that reminds me!  It is dry enough now that I can block the frieze cowl and show you how that came out.

By the way – A got through her test.  She is uncertain how she did on the morning section, she did not feel good about it, but she is more confident about the afternoon section.  If there are sections she passed, she doesn’t have to take them again to get her certification.  That is what she is hoping for now, to pass at least half of it.  I still hold out hope that she passed the whole thing, but she doesn’t think so.  To celebrate, we did nothing that night, but went out the next night with Mom and B to a local lobster pound for dinner.  We were singularly unimpressed with it, though the food was fine.  Won’t go there again.  I did have fun with A – she as a joke wrote on the grocery list “chips cookies chips cookies chips cookies” which is very unusual for her. So, I got lots of chips and cookies and piled them all at her place at the table.  It was quite a mountain, and she cracked up when she saw it.

Another thing I did for     myself was get the air conditioner upstairs and almost set up.  Years ago, we got one of those units on wheels, thinking we could use it to cool off the bedroom.  It worked that year for the two days we needed it, and we stored it down cellar.  A couple of years later we needed it again, hooked it up, ran it for a few hours and it flooded the bathroom! So, it went back downstairs never to be thought of again.  But with this hot and humid weather, it was really bothering me that we couldn’t use it.  So I gave it lots of thought, and decided that if I set it up IN the bathtub (we have a separate shower), then if it flooded, so what?  That seemed good.  But then window by the tub is up quite high, and the hose is supposed to head to the window relatively levelly.  So I thought I could stack up two of the picnic benches A made us and that would do the trick.

I lugged that AC unit upstairs Friday, keeping it level, no easy task! and got it into the bathroom.  Got the benches stacked in the tub.  Then realized I could not lift the unit up onto the benches alone!  Bummer.  When A got home, she helped me get it all rigged, and we started it right up.  It did a great job, cooled off the bathroom and bedroom just fine. The cats hate it, the door is closed, it makes noise, bad bad bad.  I do not care.  The best part?  No leaking whatsoever!  I suspect that the drain plug in the back had not been in tight the second time we used it.  Now that the weather has cooled off again, we will dismantle the tower, but leave the unit upstairs in case the humidity comes back again. It was nice to be able to come home, get the room cooled off before we went to bed, and then get to sleep before the heat got in there again. Because you know, I live with the cat charmer. We were not allowed to leave the bedroom door shut at night, because the cats need to be able to come and go. I suggested we put a cat door in the bedroom door, but that was met with eye rolls.  If we ever build another house, it will have real air conditioning.  For those few summer days that we need it, it will be worth the expense.

I love summer when it is just warm and soft, not brutally hot and humid.  Like this weekend will be! But climate change is real and it sucks.