I wanted to bring some presents to Wisconsin to share with my fellow Ravellers when we met in September, but most everything I could think of was a budget buster when multiplied by the expected number of attendees.

Eventually I decided that the best thing to do was to buy undyed yarn and dye it myself.

I scoped out their Ravelry profiles and projects and stashes for inspiration as to colors.

I sourced the yarn (many thanks to Debbie at the Purple Fleece for being willing to sell me undyed yarn!)

I loaded up on a few new colors of dye from the Purple Fleece.

I went online to look for different ways to dye, and then I got started.

It was a little nerve wracking because I wanted this yarn to be perfect (which I knew it would not be) and be something these ladies would enjoy using (which I could only guess at), but I also knew it could be lots of fun.

So one nice Sunday in July, I got started with two skeins.  No point going overboard, right?

First I soaked the yarn in water with white vinegar added, for at least an hour, maybe longer. (Afterward, Debbie told me I just needed to use some dish soap with these dyes, so I did that ever more.)

Then I kettle-dyed each skein a reasonably light base color, using the crock pot.

I let it simmer away until the water was clear ( I left it over night, but it might not have needed that long).

Then I cooled it, wrung it out and spread it out on plastic.  I then sprinkled dry dye powder sort of everywhere I wanted color specks to be, spritzed it with water in a spray bottle, wrapped it up in plastic wrap and microwaved it in a casserole dish used only for dyes (never food again.)  I did this for ten minutes of heat – 2 minutes heat, 2 minutes resting, 5 times.  Then I rinsed it and so much color came out!  This worried me at first, I bundled it back up and heated it for four more minutes, then washed it some more.  Then I realized that of course lots of color will wash out, I sprinkled dye onto small areas!  So I rinsed it with some more vinegar, and kept rinsing until the water ran very clear.  Then I soaked it in a tiny bit of Euclan. I like to finish my yarns off with the lavender scented Euclan in the hopes it will stave off moths, etc. I have noticed that Euclan will cause bleeding the first time it is used, and sure enough, it did again. I would rather have that happen now than after it is knit up.

Eventually we had all clear water, and I hung it out to dry.

Soon I had two skeins dripping in the back yard, and I was eager for more.  But work intervened, so it had to get put away for a few days.

Again, I kettle dyed two more skeins with a pale color, and then I mixed up some dark dyes.  I used a turkey baster to put pools of the dye on one skein. I left lots of the light color, and let the color bleed a bit.

For the other skein, I tried mixing small jars of the dark dye with some water, and then putting some of the yarn in the little jars, kind of spacing around the skein.  That worked pretty well, but there were a few light areas, so I used the turkey baster again to add more dye.

Each of these skeins had five two-minute sessions in the microwave, each separated by a two minute rest period.

But I really wanted something that would read as red.

I knew that when I dyed my red sock yarn, I was able to get a really vibrant red in the crock pot.  But that seemed like it would be a boring gift to give someone.  I wondered about sprinkling other colors on the red to change the tone and depth of red.  So that is what I tried next.

I dyed it as dark a red as I could get it, and then rinsed it until the water ran clear.  Then I got to sprinkling dye powder. I used some navy blue and some black.  Now, Debbie warned me that the black is very powerful, so I wasn’t sure what would happen.  But I really like how it toned down the bright red to a pretty, shaded skein.

Next up – blues.  You knew they would show up eventually, right?  I love how the aqua speckles turned out, but I wanted one with some different colors in it.  So I did another aqua base, but this time, I sprinkled some yellow and pink, as well as the turquoise powder on it.

And then I did some that were just plain blues, because in my world, you can never have too much blue.  🙂

Since things were going so well (too well!) I got creative. I made such big messes while trying to layer colors to get green and orange that I finally over-dyed those two skeins – one to a bright mostly solid green, the other to a dark blue. Into every life some solids will come, right?

I tried one more time, with no better results, to make an orange with over dying.  Since it didn’t work, I just kept on cooking it in Bermuda Sand, and actually, I wish I knew how I did this one, because I really like how it came out!  It has tiny flecks of pink and blue, and loads of shading and life.

Giving up on fanciness, I dyed the last two skeins in purple that I mixed up BEFORE I added the yarn.  I did use the turkey baster to add some pops of the blue and red while it was in the pot, but for the most part, these were just plain kettle dyed.

And that’s it – a month’s worth of messing up the kitchen and having fun with colors.  I hope the ladies like them and make some fun things with them! 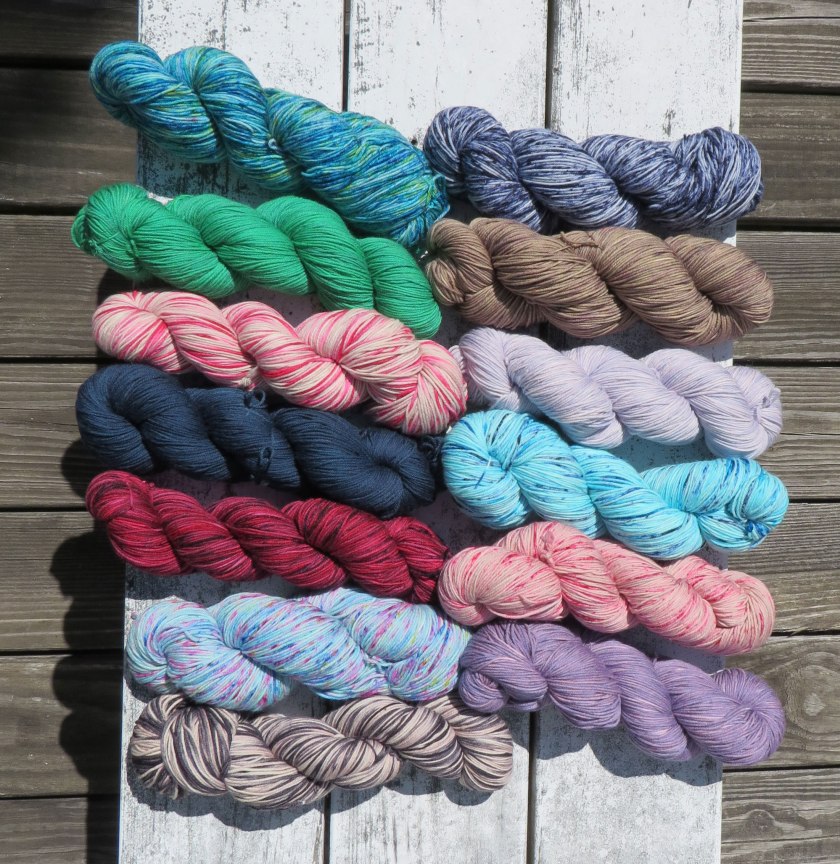 And if you are an indie dyer, you have earned my utmost admiration and respect – this is NOT easy!  Colors don’t always do what I think they will do, and while that is OK sometimes, other times, not so much!  Kudos to you all for making the gorgeous yarns and rovings that you do! 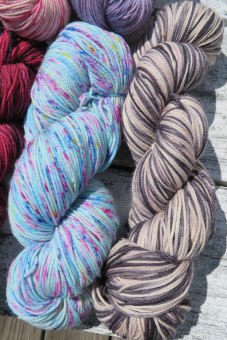 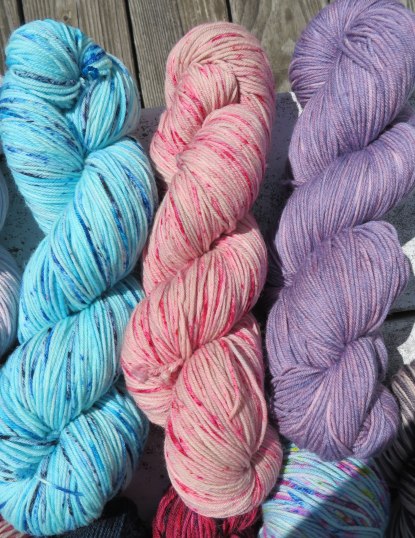 28 thoughts on “Dyeing yarn, aka the secret fiber project”