It’s hot.  I know, I know, compared to the rest of entire country, it isn’t. But it’s humid.  And hot. High 80’s and low 90s is hot. And however well prepared we are for winter with all our heat sources and blankets and coats and hats, when it comes to summer, we are woefully unprepared for heat.  SO MANY places don’t have AC, I am so lucky we have it at work!

Even the pool isn’t cool anymore, it was 85 degrees last night.  Cooler than the air, but not cool.

After our weekend of “partying” we were pretty tired.  I spent most of Sunday in Mom’s pool (which gets more shade than mine does, so was 73 degrees) with niece E the younger and various other family members who came and went.  I am the aunt who stays in the pool as long as the kids want, as I recall being little and having to stop swimming when the last grownup stopped.  But even I had to tell her it was time to get out after about 4 hours.

Monday night I had a little medical emergency, and woke dear old A up to take me to the ER.  They got me sorted out and I guess I am fine, although Benadryl was involved, so I was sleepy for a day or two.  I was really worried that I was imagining that I was sick, so it felt good to hear the doctor say “if it happens again, come right in, don’t wait.”  And there is no reason to think that it will.  Of course now I have follow up tests and appointments and instructions and blah blah blah. All I can say to you all is that if you think you might be having a heart attack, don’t worry about waking up your partner or spouse or friend – DO IT and get it taken care of.  I wasn’t, but it was something else, and life goes on, thankfully.

Since we were up all night, A and I both stayed home from work Tuesday and that has just thrown my week out of whack, let me tell you!  What day is it?  We did NOTHING on Tuesday.  I mean, I slept until 10, stayed in PJ’s until 5 when I put on my swim suit and went in the pool to cool off (it was HOT, remember?)  A didn’t even do that, she was not able to sleep much after we got home.  They gave me the benadryl, not her! She lay awake trying to hear me breathing, but the fan drowned me out, so she just worried all night.

Wednesday we returned to work, and all was as if it never happened.  A worked late, so I went for a swim as soon as I got home, and then quick as I could, messed about with dyes and fleece and yarn, and almost had the mess cleaned up by the time she arrived home. I can’t wait to spin this and see if it looks like I think it will.  I want to spin the blue green as one single, and the blue green red as the other, then ply them together.  I hope it will be mostly blue/green with occasional pops of red/purple for interest. It isn’t much, so I won’t really get enough to do anything with, but it is all about experimenting.  If I like it, I can do the same thing with a bigger hunk of fleece.

The yarn is some baby ull I wanted to make green for the stems and leaves of a blueberry hat, so that came out just fine. It is about ten to fifteen yards, and again, I can make more of that if I want it.

I like this – I don’t need a whole skein of a color if I only need a few yards of it.  Makes me want to dig out a color work baby hat pattern I have that uses 4-5 different colors. I have never made it because of that, but now I might be able to handle it.  🙂 It’s a good excuse to play with dyes!

Which is what I did with these scraps…

I am knitting away on my shawls, still in the easy shorter rows section of the bodies, but am quickly working my way to where the lace begins.  I can’t tell you how thin the gray yarn really is – it is thinner than lace weight, how can that be?  But look at the difference between it and the cloud dweller. These are two different shawls that start out the same – and I am in the same place on the pattern with them.  Let me tell you, counting stitches on the gray one is a challenge in low light, so this one might slow down when I get to the trickier parts.  It might be a daylight-only knit. 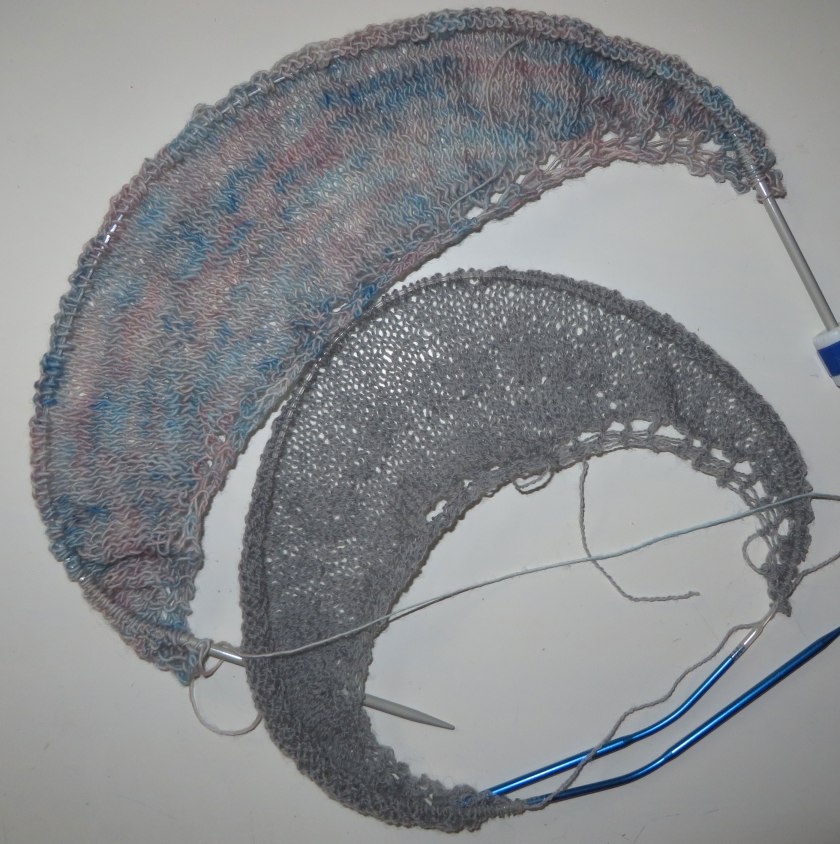 The Oaklet in Quince and Co. Tern is the one that travels to work with me, so it isn’t getting the same love the others are, but as it is the biggest yarn, it moves along quickly.

I didn’t cast on the 4th one yet – need to scare up another size 6 circular, first.  I think I have one somewhere…

I am loving all these knitting WIPs.  🙂

Then spinning – I finished one bobbin of Purple Fleece’s Salpiglossis in Coopworth.  I am going for a DK or worsted weight yarn to use for a hat.  I wasn’t sure if I would love this as it has lots of orangey gold (not my favorite color) in it, but of course, it is balanced well with purple and periwinkle, making the most lovely pinkish shades in the transition area, and I do love it! 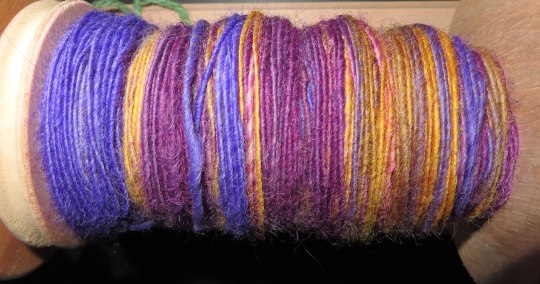 But the best news is that I got a nice fat check from the pop-up shop this week – I sold a couple of baby hats and a baby sweater as well as some jewelry from the week before that she combined with this week’s sales.  So naturally I hopped right online and ordered three beautiful braids from Three Waters Farm (on a tip from theKnittingSarah I have been following that group on Ravelry, and love the colors) and I ordered  a three month “roving of the month” club from Purple Fleece. It starts in August.  So that is SIX beautiful colored braids coming my way to spin, I just have to be patient until they arrive.  And it isn’t like I will run out, I have plenty to spin this week. and I have more plain fiber that I can dye if there is a spinning emergency.

This week we are both working on Friday, and have NO plans for the weekend – unlike last week.  Not sure exactly what I will do, but I hope to be able to go to the knitting/spinning group that meets over at the Purple Fleece on Saturdays, and I am pretty sure there will be some pool time, especially if it doesn’t cool off, which I guess it never will again. And laundry.  There is always laundry, grocery shopping, etc that has to happen. Until we win the Powerball, we will have to do it ourselves.