Saturday the kittens turned one year old. We had an impromptu party for them – A’s sisters and brother-in-law came over for waffles. Zumba was very social, but Allie hid under the bed covers. Afterwards, she apparently felt like that gave her some special rights.

She was wrong, and immediately after this photo was taken, she was chased off the counter, and the drying mat went off to the laundry. Really, it did!

Today I spent some time in the craft room – besides the kittens, we have three important March birthdays, so I had some cards to make. Assuming that the recipients don’t read this, I’ll share them here with you.

This one is for my sister-in-law, who has a birthday on Tuesday. It looks harder than it is to make this one – the hardest part was finding colors of double-sided paper that I liked. BoBunny came through for me with this nice paper, striped on one side, and softly shaded colors on the reverse. Then I used my Cuttlebug and a set of Spellbinders dies to make the medallion. 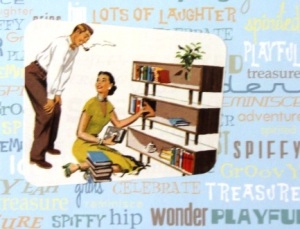 Then comes my brother-in-law, who will be 50 on the tenth (the inside says “Welcome to your 50’s!”) It was the easiest card I have ever made, as it is just a fun sheet of word paper and a sticker. But I think it says it all. 🙂

The last one is for mom, who has her birthday on the 12th. It’s hard to get a good photo of iridescent chalk, but trust me, it looks soft and shimmery. The background paper is from K and Company, and has a nice embossed texture to it. The oval is once again cut with a Spellbinder die (remember, A got me a bunch of them? I love them!) the stamp is from Hero Arts. I used a glue pad, so that the chalk would stick to the image, then I brushed the whole thing with a soft gray shimmer chalk, and highlighted the scallops with the same blue as the stamped image. It looks a whole lot different without the glue to hold the chalk. Sealed the whole thing with fixative, then used foam squares to stick it to the card base.

And now all there is to do is remember to mail them off in a timely fashion! And of course, start planning for Easter cards and the April birthdays.